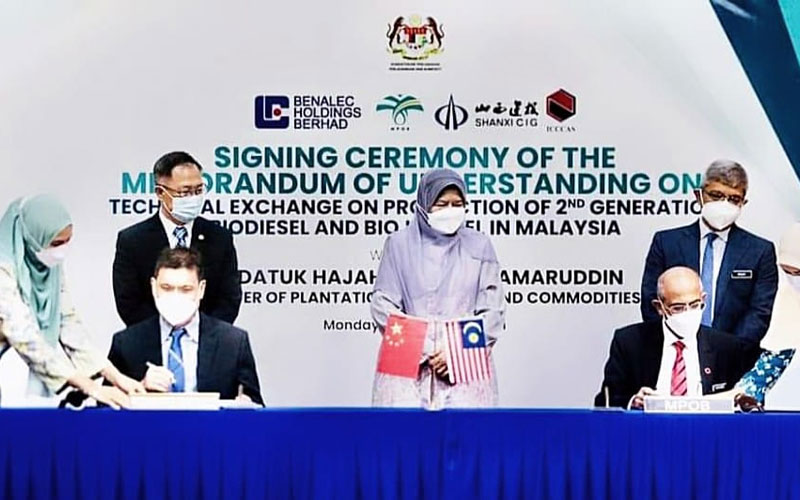 Free Malaysia Today
13th December, 2021
KAJANG: Malaysia has ventured into the production of second-generation biodiesel and biojet fuels, which are expected to be commercialised to the global market in the next four to five years.

Plantation industries and commodities minister Zuraida Kamaruddin said the significant milestone was achieved following the signing of a memorandum of understanding (MoU) on technical exchange on the production of second-generation biodiesel and biojet fuels in Malaysia today.

The MoU, entered into by the Malaysian Palm Oil Board (MPOB), Pengerang Maritime Industries Sdn Bhd, Shanxi Construction Investment Group Co Ltd and the Chinese Academy of Sciences’ Institute of Coal Chemistry, would see the setting up of a hydrogenated vegetable oil (HVO) plant in Pengerang, she said.

The HVO plant would be able to produce sustainable aviation fuels (SAF), known as biojet fuels, by converting palm oil to become hydrocarbon fuel that can be utilised in the aviation industry.

An investment of about RM3 billion would be needed for the construction of the plant, including land acquisition and infrastructure, Zuraida said, citing that the first phase of the plant would have 500,000-tonne production capacity a year.

“This collaboration on the HVO plant in Malaysia will further promote economic growth. I firmly believe that this project will add more value to Malaysian palm oil products by strengthening trade exchanges in high value-added products,” she told a press conference after the MoU signing ceremony.

Zuraida said a study on the second-generation biodiesel and biojet fuels involving green energy technology had been carried out in the past six months and would likely be completed over the next six months.

“Currently, the industry is led by a Finland-based company, Neste Corporation, which produces HVO in Singapore, (both of which are) non-palm oil producing countries.

“Malaysia is the world’s second-largest palm oil producer and China is one of the countries importing our palm oil. I think we should be able to do better than them (Neste) in time to come,” she said.

Shanxi Construction general manager Wang Chongjun said construction of the HVO plant would start once the study was completed as it would determine the type of technology and facilities required.